Life in Space – A Day (or at least, the beginning of one) 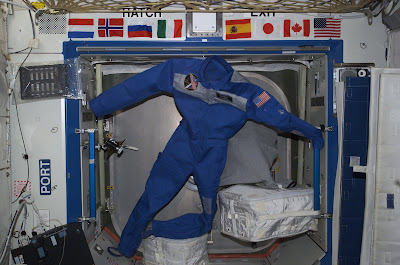 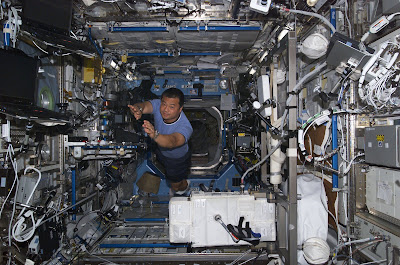 On a Space Shuttle, music is piped up from the Mission Control Center. On the Space Station, you set your watch alarm. Or, as is sometimes the case on Earth, you awake early, all on your own, wondering “What the H..?!”

A typical day in space (is there such a thing?) starts a lot like a day on the ground, except that you are floating. Turn off the alarm. Unzip yourself out of your sleeping bag. Open the doors to the sleep station, haul yourself out.

You can do it however you like, but on the International Space Station, I fell into a routine of cleaning up in the evening before bed, and then wearing a clean T-shirt and underwear for sleep. In the morning, I was already half dressed. I would pull on a pair of Nomex shorts and white cotton gym socks, ready to get going. This was the typical uniform onboard, except for when the cameras were going to be on.

When we had a scheduled video interview, we would wear a polo-type crew shirt, or in the case of a serious event, don a flight suit.

What’s the first thing you do in the morning on Earth? Well, it’s not so different onboard a spacecraft. Why should it be? However, I will dedicate another entry to the issue of space toilets and leave it alone for now.

How about something like brushing your teeth? In zero gravity (or more accurately, microgravity, if you’re a stickler for such things), some things are easier, like moving medium or large mass items around, but many things are more difficult. It is unbelievably easy to lose things. Get distracted for a moment, and that toothpaste cap is gone! Even if you are good about anchoring such things behind a rubber bungee, some rookie going by could knock it loose for you.

So, how do you brush your teeth in space? Long ago, NASA started buying only toothpaste without detachable caps, thus solving the lost cap problem. So, start by filling a drink bag with water and bring it with you to the hygiene area. Tuck it behind a rubber bungee. Remove your hygiene kit from behind its bungee and unzip it. Find your toothbrush inside of your hygiene kit, safely tucked away inside of a fabric pouch with a Velcro top. But first, take out your toothpaste tube, and stick it to the wall, using the Velcro dot on it. Secure your hygiene kit behind a rubber bungee, after partially zipping it up, so that things don’t accidentally float out.

Still have your toothbrush between a couple of your fingers? Hopefully yes. Remove your drink bag, and with one thumb, flip open the straw clamp (which keeps liquid from seeping out of the bag), and gently squeeze out a bead of water onto your toothbrush, watch it get sucked into the bristles. Hold the straw of the drink bag in your teeth, and with one hand, fix the straw clamp in place, and replace the bag behind the bungee.

Almost all of the rest is fairly straightforward. Flip open the cap of the toothpaste tube, squeeze some out on your toothbrush, go to work on your teeth. Ok, you’re done. Now what? Where are you going to spit? There’s no sink……..So, into a tissue? Then you’ve got a wet tissue, and what are you going to do with that?? So, I swallowed. Filled my mouth with water and swallowed again. Drew some water onto the toothbrush and sucked the water out. Dried the toothbrush onto a towel and replaced it, and the toothpaste, into the kit.

What’s left? Any idea? Yep, the drink bag. That, I would bring to bed with me, so that I would have something to sip on in the middle of the night, should I wake. Just like back home on Earth, except a bit more complicated. And, brushing your teeth is one of the simpler tasks that you’ll perform in space.

Leroy,
Hi hey I hear that you are joining the commission on our next space boost system. I have an idea that may be interesting. With concerns about lower than desired boost performance of Ares 1 and possible lateral transients at liftoff, why not consider a 2 SRB system. Put the liquid tank in the middle and launch it. It may require pad modification (SRB's closer) but it would get us out of the hole. More performance is better than less, it would be quite a hot rod ride with all the power. It would also make the catwalk lower and more desirable.
-John McKenna

It is great that you are asking for citizen input on manned spaceflight. Thank you.

I think NASA needs to develop a more integrated manned mission program that is a full mix of manned and robotic missions that fully explore and survey our solar system. This should include the asteroid belt as well as key moons of the planets of the outer system.

What we can learn at home so to speak will put us in good position to understand what we will find in the extra-solar worlds. Additionally we need to have a better understanding of our system in order to protect and prolong our own planet's survival. So that also means more SOHO missions as well.

Sorry for the long message, but you asked an important question. You have my full support in the coming panel meetings. Thanks again.

Hello,
Thank you for asking for our opinion.

In times of crisis you should invest as much money as you can to save it from inflation.
Well, each dollar that was invested into the apollo program came back into the economy 8 times, studies say.

It would be a great idea to start a new progress: a manned Mars mission.
It would inspire all the people over the planet.

Using 'Mars direct' or a similar plan you can do that for 25-40 billion dollar (plus only 2 billion per flight)
Developement would not take more than 10 years.

A moon base is also something great, it's better than doing nothing. But hen there is the decision whether to go to moon or to Mars, we should decide for Mars.

Mars has an atmosphere, it's in process of global warming. We can study it, and if we are lucky there'll be vulcanic eruptions that recreate an athmosphere that is thick enough to enable liqiud water.
Humans could move on the surface without wearing a spacesuite (only oxigen mask).

In fact, Mars holds everything for us. Water and CO2 to produce rocket fuels and drinking water to cut mission costs.
Because of (past) volcanic activity there are ores like on the Earth (iron, copper, gold) whereas on the moon there`s a mixture of everything - you have to seperate it before using.

Plants can grow in greenhouses on the surface, because one Mars day is nearly the same as an Earth day.
You can thus produce food, oxygen and make the astronauts happy caring about the plants.

I'm too young so I didn't see Apollo-landings. But I'm born to soon to see a spacefaring humanity.
NASA can take huge steps foward!!
I hope NASA will still perform many human missions soon in near future.

(I'm from Austria, hope you can read my English)