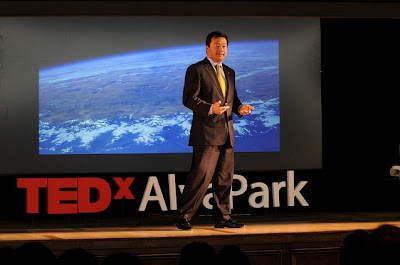 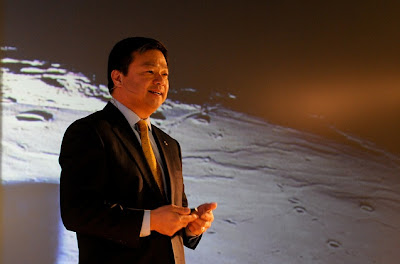 Spacy Halloween Leroy Chiao October 5, 2011 July 20, 1969. I will remember that day forever. I was an eight-year-old kid, living in Danville, California. Although Danville is now a thriving small city, back in the late sixties it was just a small town located about thirty miles east of Berkeley, with maybe two stoplights. When my family moved there in 1967 from Wichita, Kansas, my sisters and I were amazed at what we thought were mountains (they were actually hills). These exciting forms were lush and green. We were thrilled about our new home. Although I was born in Milwaukee, Danville is my hometown. It was a great place to live and grow up. My friends and I used to slip through the barbed wire fences and go exploring in the hills. There was a small pond, where we would bring our model boats to float, and catch tadpoles and frogs. My family frequently went hiking in Rock City on Mount Diablo, a trail of sandstone formations that leads to a peak, which offers a great view of the valley. I had my first Mexican food in Danville, in a wonderful little restaurant called El Dorado. Although it is long gone, I remember the bean dip they served that had little bits of blue cheese mixed in. I always ate so much of the chips and dip that I was never hungry when my meal arrived. Two of my best friends, Russ and Mike Miller were over at my house that day. It was a warm Sunday, and our house didn’t have an air conditioner. So, my father had sprayed water on the back patio, which was partially shaded, and moved our black and white TV outside (complete with rabbit ear antennae). We were eating Spam and peanut butter sandwiches (one of my Dad’s specialties), which is surprisingly not bad. Shortly after lunch we all watched the scene in the Mission Control Center, and listened in awe to Neil Armstrong’s radio transmission coming from the Moon announcing that Eagle had landed. Wow! Walter Cronkite threw his glasses on the table and was almost speechless. Even as a kid, I knew the world had just changed. And, I knew that I wanted to be one of those guys. So, it was natural that for Halloween that year, I went as an astronaut! I had already built a command module underneath the workbench in our garage. This left the workbench still functional (it was the site of many model airplane and rocket constructions, not to mention wooden projects of all kinds, including an almost-working hang glider, but that’s another story). So, I set about making my costume. A cardboard box made up the hard upper torso (HUT, in space parlance) of my spacesuit. I cut head and arm holes in it, cut the bottom out for my legs, and glued a wooden display and control module (in NASA-speak, a DCM) in the front. I did have gloves, but no helmet. I’ve always been a pragmatic guy, and suffocating for an authentic look just didn’t resonate with me. Even the candy bag fit, since astronauts do carry bags to hold tools and equipment on real spacewalks. While wearing my spacesuit on that Halloween, I didn’t see too many creepy or eerie things. But, thirty-five years later while wearing a Russian Orlan spacesuit, I did see something that raised the hairs on the back of my neck! Russian cosmonaut Salizhan Sharipov and I were conducting a spacewalk outside of the International Space Station (ISS). In between installing navigation antennas, I looked to my right. We were just in twilight, so I couldn’t discern the Earth. Everything was lighting up as the sun started to rise. Suddenly, I saw five lights, flying in formation go past! “Salizhan, do you see that?!” Do you see the lights flying past us?” I asked. He didn’t, and the lights were gone. While I do believe that there is life elsewhere in the universe, I don’t think we’ve yet been visited. So, these lights were perplexing. Enthusiasts heard my transmissions, and quickly there were stories posted that I had seen UFO’s. Could this be proof that NASA and the Air Force really had been covering up Roswell and Area 51 for decades? Thanks to other enthusiasts and the Internet, the answer was quickly found. These folks worked out the position of the ISS at the time of my radio calls, and determined that we were flying over the coast of South America at the time, and that it was twilight. What I actually saw, were squid fishing boats along the coast, strung out in formation. These fishermen use very bright lamps to attract the squid, and the rotation of the Earth, which I could not discern in the twilight, made it appear that the lights “flew” past us! Living now in Houston, my Halloweens are filled with new excitement. The current talk at the dinner table is what our four-year-old twins want to dress up as this year. I’m thrilled to say that astronaut is one of the candidates. Maybe we will make the spacesuits together. And when my wife isn’t looking, maybe I’ll introduce the twins to Spam and peanut butter sandwiches. Leroy Chiao served as a NASA astronaut from 1990-2005. During his 15-year career, he flew four missions into space, three times on Space Shuttles and once as the copilot of a Russian Soyuz spacecraft to the International Space Station. On that flight, he served as the commander of Expedition 10, a six and a half month mission. Dr. Chiao has performed six spacewalks, in both US and Russian spacesuits, and has logged nearly 230 days in space. He has performed scientific investigations in orbit, and helped to construct the International Space Station. He remains a big Halloween enthusiast, but has gone only once dressed as an astronaut.
Posted by Leroy Chiao at 9:25 AM No comments: