On the Future of US Human Spaceflight 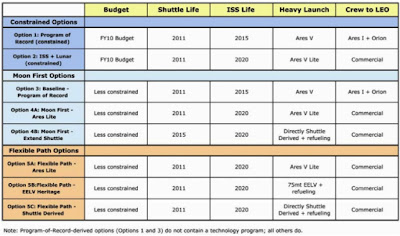 There was a historic event the other day. For the first time since 1981, a new rocket was fired from one of Launch Complex 39’s launch pads at Cape Canaveral. This was a flight test of a part of a rocket under development, called Ares-1.

The flight appeared to be flawless. After battling weather constraints, Ares-1x leaped off of Pad 39B and accelerated into the Florida sky. Reaching an apogee of just a bit over 20 nautical miles, the single stage burned out and separated from the dummy second stage, and descended by parachute to the recovery area in the Atlantic.

What is the future of US Human Spaceflight? Will it include the Ares family of rockets?

This summer, I served as a member of the Review of US Human Spaceflight Plans Committee, chaired by respected aerospace veteran, Norm Augustine. Our charter was to review the current NASA programs, and to present options for the US to move forward. President Obama, through his Science Advisor, wanted a reality check. Our job was not to provide recommendations, but rather to come up with options.

The Augustine Committee, which is how we quickly came to be known, was formed in late May. We presented our options to the White House on August 14, 2009. Later that month, we issued a summary report, and just a week ago (October 22nd), issued our final report.

Since August, the Committee and our reports have come under public attack by the former NASA Administrator, and several members of Congress. Lobbying efforts on behalf of some of the big aerospace companies supporting the program of record have produced videos and other products, vociferously supporting said program. Some members of the “New Space” movement have been loudly complaining that they should get a large piece of the space budget, although most of them haven’t produced anything of significance to date. All of this tells me that the Committee did it about right.

What is surprising to me is that most media and other folk appear confused by what is written in the report. There are headlines and accusations that the Committee called for the end of Ares, the end of Constellation, the throwing of human access to Low Earth Orbit (LEO) to the unproven commercial space arena, and other incorrect assertions. Let me try to set the record straight.

Program of Record (Constellation): The Constellation program was a reasonable way to implement the Vision for Space Exploration (VSE), which was announced by President Bush in 2004. However, it never received anticipated funding, and has suffered several technical and programmatic problems. As a result, estimates show that substantial funding would be required to correct these problems. These high levels of funding would be unreasonable to expect at this time. Moreover, the designs would require large recurring costs to operate, a problem, which plagues NASA. The current program evolved from the original VSE and became almost an exclusively Moon-focused program, and then, presumably in the face of budget shortfalls, almost exclusively an Ares/Orion focused program. The baseline option fits the program of record to the Fiscal Year (FY) 2010 budget, by moving the milestone dates significantly into the future. No matter how we got to where we are today, it is a valid question to ask, whether America should continue down this path, or whether a different option would be more reasonable. Frankly, public opinion seems ho-hum on a return to the Moon, with a common theme that we have already been there, forty years ago. Even scientists are for the most part, much more interested in Mars, than the Moon.

Space Shuttle: The Space Shuttle is a magnificent flying machine. Although it fell well short of many of its advertised promises, it is a technological marvel. However, its operating costs are very high, and it has had two fatal accidents in almost one hundred thirty flights. In most options, the Committee stated that the current manifest should be flown out, at a reasonable rate. This is estimated to be executable by mid-2011. In one option, the Shuttle would be operated at a minimum flight rate (one to two flights per year) through 2015.

International Space Station (ISS): The ISS is the largest space structure ever assembled. It is a premier microgravity research platform, but also has high costs. One of the most remarkable aspects of the ISS program is the highly successful international framework that has evolved. This framework can and should be expanded, and serve as a basis for future space cooperation. Most options call for operation of the ISS through at least 2020. In the two options, which include the Ares family of rockets, ISS is de-orbited at the end of 2015, because the funds to continue ISS would need to be transferred to the Constellation program. This would have a negative effect on the relationships between the United States and the international partners. In this case, significant doubt would exist, on whether international partners would want to cooperate with the US in future programs. This would also affect other areas of cooperation between the US and these countries.

Crew to LEO: The program of record uses Ares-I to launch the Orion crew capsule to LEO. The recurring Ares-I cost has been estimated to be around $300 M per rocket. Indeed, the Ares-Ix test cost was estimated to be approximately $445 M. In alternative options, the Committee put forward the proposition that commercial companies should be given incentives to create a commercial capability to launch astronauts to LEO. The technology has existed for almost fifty years, and several startup companies are working towards that goal. The Committee proposes that the commercial option be created such that it would be attractive, not only for startup aerospace companies, but also for traditional aerospace companies to participate. There is skepticism in the community on whether the startups will be able to deliver, but there should be no doubt that the traditional aerospace companies, who’s predecessors created all US crew vehicles and rockets in the past, could be successful in this effort, if the proper environment was created. The hope in promoting a commercial crew to LEO access would be the saving of funds for NASA in this arena, as well as freeing up NASA resources to concentrate on beyond LEO exploration.

The Committee put forward three classes of options: Options constrained to the FY 2010 budget, Moon first options, and flexible path options. The Committee agreed that the overall goal should be a crewed mission to Mars. Moreover, there should be a balance between human and robotic exploration missions. Scientific research funding should have firewalls, to prevent their funding from being transferred to exploration programs. The Committee also agreed that international partnerships should be expanded, strengthened and applied to future exploration programs. There should be a technology development program to enable efficient, future crewed exploration, beyond LEO. The table below contains a summary of these options.

The Constrained Options fit the FY 2010 budget, but illustrate that the funding would be insufficient to allow significant exploration progress.

The other options call for a funding increase of $3 B per year. The difference within both the Moon First and Flexible Path options, are the choice of HLV, which also affects Crew to LEO choices.

The Flexible Path options call for building infrastructure for beyond LEO exploration, by traveling to near Earth objects (NEO), Lagrange points, and other interesting flight profiles. The Moon would be included as a destination, but primarily to test hardware and operations. The intention of the Flexible Path options, is to build infrastructure and capability, to enable sustainable Mars exploration in the future.

All options, except for options one and three, include a technology development program. The Committee felt that it was important to develop new capabilities for exploration. The ISS could be used as a test bed for these efforts. As an example, space refueling of cryogenic propellants would be an enabling technology.

This is a simplified, high level, explanation of the results that the Committee has submitted to the White House and NASA. I hope that this helps to make the full report easier to understand. I hope that it is at least clear that the charter of the review committee was to present options to the Administration, not recommendations. I, like everyone else in the business, look forward to the decisions that will be made by the Administration.
Posted by Leroy Chiao at 8:44 PM 1 comment: