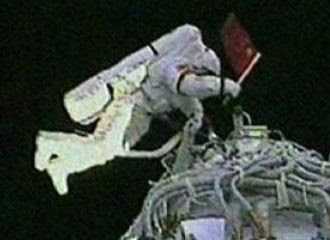 Congratulations to Chinese astronauts Zhai Zhigong, Liu Boming and Jing Haipeng for the completion of China's third manned space mission, and for Zhai and Liu's successful first EVA for their space program! This was a huge step for the Chinese program towards building and operating long-duration spacecraft.

The EVA lasted only about eighteen minutes, but it accomplished the goals of demonstrating EVA capability, testing of the suit, and stoking national pride. Zhai left the airlock, while Liu waited inside, poking his head out to take a look around.

Zhai's spacesuit was designed and made in China, while Liu wore a Russian Orlan suit. The two systems are clearly compatible, since they were used together. Indeed, the Chinese suit looks a lot like the Orlan, except that it is white in color and there is no "moon roof" window on the top of the helmet.

One interesting thing that I observed, is that what appears to be Zhai's electrical umbilical remained attached to his suit during the entire EVA. I'm not sure why the Chinese specialists would have done it that way. I would have thought that they would have wanted to test the suit's battery and the function of the systems on battery power. Perhaps they were just being ultra conservative. Zhai had clearly disconnected his water/oxygen umbilical. The Orlan suit features an emergency oxygen connector, but I didn't see one on Zhai's suit. It may have been tucked away in a pocket.

There is talk that China's next mission will feature rendezvous and docking, probably with the upper living module from this Shenzhou 7 spacecraft. The plan appears to be to conncect two or more of these modules together to form a mn-tended lab or hab, as a precursor to a full up space station. Although they've backed off publicly on a manned moon mission, you can bet that's in work. The moon is important culturally to China and it would be historic and a public-relations coup if they become the first to be back to the moon with astronauts since the Apollo program.

Leroy Chiao
Posted by Leroy Chiao at 7:47 PM No comments:

Finally back at home after hurricane Ike! Fortunately for us, damage was minimal. Trying to get caught up and get things back on track.

I'm getting ready to do a bunch of TV interviews for the Shenzhou 7 launch and the first spacewalk by a Chinese national! This will be very interesting and quite a step for the Chinese program.

Also interesting, is that NASA has reopened talks with the Chinese about space. They swear that it has nothing to do with Russia's invasion of Georgia, but please, it is insulting to think that we believe that. Will this work? Probably not. I don't think this administration is serious about space cooperation with China and that this is a feeble attempt to strike fear into the Russians. The Russians know better. Even if NASA were to cooperate with China in the ISS program, there would have to be Russian buy-in. Besides, the Shenzhou could only dock with the Russian segment, so Russian buy-in would be a hard requirement.

The first Chinese EVA is supposed to feature an all-Chinese spacesuit. The second suit is said to be a Russian Orlan, like the one I wore on my two ISS EVA's. This is significant. It means that the Chinese suit is totally compatible, support system wise, with the Russian Orlan. It is reasonable to assume that the suits are very similar. Kind of like the way the Chinese pressure suit looks like the Russian Sokol.

Nothing wrong with making an advanced version of a tried and true system. This only makes sense, especially for a program that is leap-frogging it's way to catch up with the US and Russia.

Leroy Chiao
Posted by Leroy Chiao at 1:04 AM 1 comment: