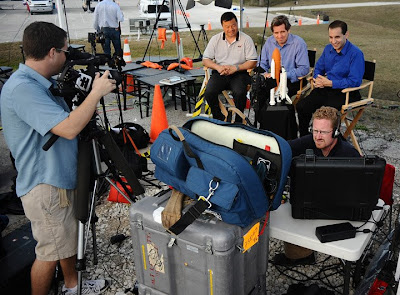 I just returned from the Cape. I was covering the STS-119 launch, with Miles O'Brien and David Waters. We were trying something completely new, streaming in real time from the Kennedy Space Center, through the web site: www.spaceflightnow.com.

What a neat experiment this was! With a few technical difficulties (which we hope to have worked out for the next time), we had an amazingly successful test of the system. We were receiving real time twitter and chat messages, which enabled us to respond to viewer questions and to get feedback. All of the feedback was very positive, it was clear that we were reaching people who were thirsting for this kind of coverage! We were reaching people all over the world, including places like Latvia, Lithuania, Sweden, Finland, Nigeria, just to mention a few.

This is clearly the future. We had a blast, our overhead was minimal (just a fraction of what a network would spend for television coverage) and we had real time interaction with our audience. We reached tens of thousands of people and hope to reach even more as this matures!

I'm at the Orlando airport, after the latest Space Shuttle launch attempt. I am covering this with Miles O'Brien and David Waters, for Spaceflightnow.com. We are streaming video over the web site, which also features instant updates and chat.

Launch delays are inevitable. While disappointing, everything must be operating correctly before the engines light. This time, it was a bit frustrating, because the weather was perfect, the bird was ready to fly, but we had a problem with a piece of ground support equipment. Anyway, NASA will try again, possibly as early as March 15.

Join us at www.spaceflightnow.com for live streaming coverage, starting about four hours before launch!