On Cooperation with China

The Case for Cooperation


In October 2003, Yang Liwei became the first Chinese National astronaut to launch into space. He flew aboard the Chinese Shenzhou 5 spacecraft, atop a Long March 2F rocket, launched from the Jiuquan Satellite Launch Center in central China. This historic event marked China’s entrance into the manned space game, only the third nation in the world to have that capability. China recently completed their third manned space mission, Shenzhou 7. During that flight, Chinese National astronaut Zhai Zhigang performed an eighteen-minute spacewalk, using a Chinese-built spacesuit.

As the first American to be allowed to visit the Astronaut Center of China in September 2006, I saw firsthand, the program’s high-level sophistication and technology. I met with Yang Liwei and Fei Junlong, the commander of China’s second space mission, Shenzhou 6. After a day of tours and meetings, it became apparent to me that the Chinese didn’t lack technology or sophistication, what they had not yet accrued was operational experience. This is something that will come with time.

Having said that, I am impressed with the deliberate, steady pace of their manned space program. Some might say that they have been conservative (their first spacewalk was a short one, and the astronauts never disconnected their electrical umbilicals), but I see it as a series of well-planned quantum steps.

China has, on at least two occasions, publicly announced desires to join the International Space Station (ISS) program. They have thus far, been rebuffed. In 2003, the reason given by the United States was that the Chinese program was too far behind technically and lacked sophistication. In 2007, they were simply ignored. Indeed, I was the lone American astronaut at the International Academy of Astronautics meeting that year in Beijing, China’s first international manned space conference. Except for a few individuals who were able to sign their own travel orders, NASA completely ignored the international assembly of Russian, European, Japanese, Canadian and Chinese astronauts, cosmonauts and space specialists.

Today, the U.S. space program is facing enormous challenges. The Constellation moon program has continuing technical and budget difficulties, and it is not at all clear what course the new administration will chart when it takes over early next year. The Space Shuttle, arguably a beautiful, magnificent, yet complex vehicle, will be retired in late 2010, barring major budget and political commitments. The United States will have no capability of its own to launch astronauts into space. We will be totally dependent on foreign partners with manned capability. Currently, only Russia is such a partner. China could be the second.

It makes sense politically and programmatically to cooperate with China, in all areas. Space would be a good place to symbolically signal such a shift in policy. The United States did this with Russia in the early 1990’s. At the time, as a skeptic, I didn’t see the point of cooperating with our former enemy and I objected to using our nation’s space program as a foreign policy tool. I thought that the Russians were technically backward. Having grown up during the Cold War, I “knew” these things to be true. It was not until I started training for Expedition 10, that I came to respect the Russians, their technology and their culture. I began to understand the benefits of using U.S. assets and programs to further political friendship through cooperation.

There have been arguments that cooperation in space with China would benefit their missile and weapon capability. Nothing could be farther from the truth. There is nothing in manned space cooperation that would make a ballistic missile more accurate, or a nuclear warhead more powerful. In fact, trying to isolate China might motivate them to further develop their own technology.

Having been rebuffed by the United States on the International Space Station program, China announced plans for a space station of their own. In order to loft this station into orbit, China is developing the Long March 5 rocket, a true heavy lift launcher. This is the most advanced rocket that they have undertaken to create. It features a sophisticated cryogenic core with liquid strap-on boosters. If the U.S. had cooperated with China earlier on ISS, would they have committed their resources to make this 800 metric ton rocket, which by the way, could also lift a huge warhead?

China is emerging as a true world power, economically and technically. Does it make more sense for the United States to engage China, or to try to keep China at arm’s length? I believe that the answer is obvious. It is important to take the global view. Isolationism has been long obsolete. One good way to deal with an adversary is to find common and mutually beneficial areas of cooperation, and turn that adversary into a friend.


Leroy Chiao served as a NASA astronaut from 1990-2005. During his 15-year career, he flew four missions into space, three times on Space Shuttles and once as the copilot of a Russian Soyuz spacecraft to the International Space Station. On that flight, he served as the commander of Expedition 10, a six and a half month mission. Dr. Chiao has performed six spacewalks, in both US and Russian spacesuits, and has logged nearly 230 days in space. He has performed scientific investigations in orbit, and helped to construct the International Space Station. Dr. Chiao was the first Chinese-American professional astronaut, spacewalker and mission commander.
Posted by Leroy Chiao at 2:07 PM No comments: 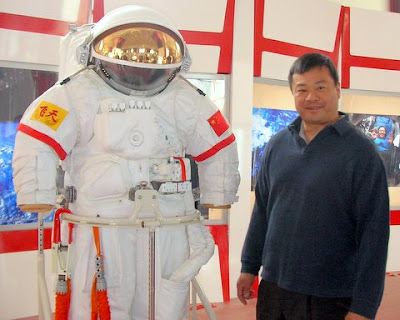 What a Difference a Year Makes!

Wow, I am blogging to you from China! Only a year ago, I was having dinner with the President of Google China. He told me then, that Google blogs were not turned on here.

Now, they are working just fine. I am glad to see that things are improving. I am encouraged that things seem to be going in the direction of more openness.

China cannot and should not be ignored. We are on the edge of a new era in the United States and the world. Cooperation is the best way to move forward.

Leroy Chiao
Posted by Leroy Chiao at 7:54 PM No comments: