This week's news included Lisa Nowak in court, asking that her ankle GPS bracelet be removed. This whole story is sad for all involved. Lisa and I overlapped by about ten years at NASA. She was a capcom during one of my Space Shuttle missions and during my long-duration flight aboard the International Space Station. I didn't know her well, but found her to be a serious and well-intentioned person.

Some say that this case reflects badly on all astronauts. I disagree. As I stated in a previous posting, astronauts are professionals. However, we are human and fallible. There have been a few cases of bad judgment by astronauts over the years, it's just that most of these incidents never made it into the national news. I don't think people judge the entire astronaut corps based on a few unfortunate incidents.

I don't know what will come of her case, but it appears that she is expressing regret and remorse for her actions. I am glad that this is so and that she appears to be in a better state of mind than before. I really do wish her the best.

Leroy Chiao
Posted by Leroy Chiao at 7:55 PM No comments: 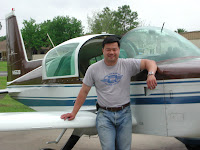 I went out and flew a tailwheel airplane today. It was the first time for me in about twelve years! My landings were actually quite good. I think I surprised my instructor and I certainly surprised myself!

What is it about flying that gives a certain satisfaction? Is it the satisfaction of doing something well? Doing something that if not done well, can be dangerous? I don't know the answer, really. I've been flying airplanes for about twenty three years now.

I learned in Cessna's and have flown in many different models of aircraft, including Piper's, Beechcraft's, Socata's, Grumman's, a few experimentals as well as NASA T-38 jets. All are different and many give a different sense of satisfaction.

Here is a photo of me with my Grumman Tiger. I don't know what it is, but there is something about flying airplanes that I like.

Leroy Chiao
Posted by Leroy Chiao at 10:01 PM No comments:

NASA has decided not to repair Space Shuttle Endeavour's heat shield before the vehicle returns next week. Was this the right decision?

I think so and I am glad to see that the process worked to arrive at this conclusion. The facts are that we have seen similar tile damage postflight in the past. The damage is in an area that does not contain critical systems or wiring underneath. Modeling (although I take modeling results with a healthy grain of salt) has shown that heating will not be severe in this area.

Sure, it would have been a good data point on repair techniques and effectiveness. However, one maxim that we live by in the space business, is that no matter how bad it is, you can always make it worse! Thus, any decision like this needs to be weighed carefully. A bump by a helmet or a tool could easily cause much worse damage in a much worse area.

Like all other enthusiasts, I eagerly await Endeavour's return next week!

Leroy Chiao
Posted by Leroy Chiao at 7:08 AM No comments:

STS-118 is in orbit! After a beautiful, on time and nearly flawless countdown, Endeavour roared into space at about 6:36 EDT on August 8th. I was doing the live CNN coverage with Miles O'Brien.

Now that the crew is in orbit, I've been reflecting on the future of space exploration. There are fourteen shuttle missions left on the roster before the scheduled decommissioning of the space shuttle fleet, in 2010. What's next? The new NASA spacecraft, dubbed the Crew Exploration Vehicle (CEV) and named Orion, is due to fly no sooner than 2014. It is over 5000 pounds overweight and I hear that the toilet has already been deleted, as well as some of the radiation shielding, in order to cut down on the weight. The Ares 1 rocket is also having significant design issues and the Associate Director for Spaceflight, Scott "Doc" Horowitz, who is the main proponent of what has come to be called the "Scotty Rocket" has announced that he will leave NASA in the next few months.

Add to that the fact that we will elect a new President very soon. No matter who wins, something is bound to change. Will Mike Griffin still be administrator? He has pretty much ensured that the shuttle program cannot be restarted without significant costs, in order to leave no alternate path to the one that NASA is going down. Is the US finished in government space programs?

The wild card is the commercial sector. There are a lot of private companies trying to do manned spaceflight. Some are credible, others much less so. There have been many false starts along these lines in the past. This time, it seems that the critical mass is here, with the advent of SpaceShipOne in September of 2004.

Is the future of spaceflight going to be in the private sector? Send me your thoughts!

Leroy Chiao
Posted by Leroy Chiao at 1:24 PM No comments:

I'll be going to Florida to watch the STS-118 launch! Barbara Morgan will finally get her chance to fly in space. We will be rooting her on from the beach. Barbara trained as Christa McCaullife's backup in the mid-1980's. Next week, she is scheduled to be the first school teacher to fly in space.

I think it's great. Tell me what you think!

Leroy Chiao
Posted by Leroy Chiao at 7:41 PM No comments: