This has been a rough week for NASA and for the astronauts. A report has been released which alleges that on at least two occasions, NASA astronauts have been allowed to board spacecraft for launch, despite opposition from flight surgeons and other astronauts on the scene, because of concerns of alcohol consumption.

I must say that in my fifteen years at NASA, I never had even a whiff or hint of anything like this ever happening. First and foremost, astronauts are professionals. We pride ourselves on doing a good job. High personal standards are what got us into the corps in the first place. I'm not saying that there is no way that this has happened, but it seems farfetched. Flying into space is such a fantastic experience that I cannot imagine anyone wanting to be in anything but the most alert state.

The astronauts are not all above reproach. We've had our share of scandal and examples of poor judgment. In any population, especially of high-performing people under stress, there will be a few instances of excess. We are all human after all. Who of us has not ever had too much to drink at one time or another? What I'm talking about though, is that in general, when it comes time to do the job, astronauts, like other professionals, step up to the plate and take the job very seriously.

The allegations are very serious and possibly true. However, in the absence of any specifics, it is impossible to determine the veracity of the comments. NASA will conduct it's own investigation, I'm sure. We'll just have to wait and see what comes of it.

We've had a very successful expedition up here on Devon! It is time to go home. I've taken down my tent and packed my gear. The airplane arrives this afternoon to take us back to Resolute. From there, reverse track back to Ottawa and finally home to Houston on Sunday night. I'll miss this place. Nice folks, smooth operations and a productive and fun time. I hope to return someday!

Leroy Chiao
Posted by Leroy Chiao at 11:07 AM No comments:

We inspected several special areas on Devon Island today by helicopter. They are inside of Inuit owned land and special permission is required. Our stops included Saphire Lake, Stoker Falls and Astronaut Canyon. The scenery is quite spectacular. What is odd is the absence of obvious life. There is the occasional small flower, but no bugs, no algae in the water. There are fish, but we didn't see any. The occasional polar bear is also known to roam through!

Leroy Chiao
Posted by Leroy Chiao at 4:05 PM No comments: 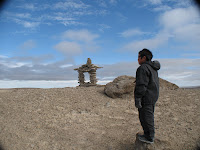 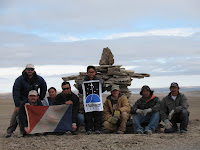 Inukshuks are a part of Inuit culture. They are used to mark trails and also points of significance. Two years ago, Keith and others built an Inukshuk to honor the crew of Space Shuttle Columbia. On this expedition, we created an Inukshuk near the Columbia memorial with the help of some of the Inuit who are currently at the HMP.

We are shown with a Challenger Center flag and an Explorers Club flag in front of the completed Inukshuk. It is appropriate that these memorials be built here on Devon Island. What a great way to remember these crews, who gave their lives in the pursuit of space exploration. Here at HMP, research and testing work will help further exploration of the cosmos as we reach out past low earth orbit to the moon and on to Mars!

Leroy Chiao
Posted by Leroy Chiao at 8:08 PM No comments:

Resupply is critical, whether on Earth, in space or on another planet! During my mission onboard the International Space Station, we were resupplied at three month intervals by unmanned Progress resupply vehicles. They brought us food, water, oxygen, fuel, repair equipment, tools, research experiments and supplies.

Here on Devon Island, we are resupplied by Twin Otter aircraft. Just like the Progress, they bring food and other supplies, as well as repair and building materials, scientific equipment and experiments.

On Mars, regular resupply of the bases there will also be critical to operations.

Leroy Chiao
Posted by Leroy Chiao at 11:47 AM 2 comments:

The Rover Team from NASA-Ames is testing software for future rovers. They have two here, equipped with different sensors. The software processes imaging data and compares it to uploaded topography data to determine the best way to get from point to point. In addition, the rovers are able to image and map their surroundings.

Here is a link to a time lapse movie clip of the sun that Matt created. It tracks the sun as it moved between 2 AM and 6 AM the other morning. Here in the Arctic during this time of year, it is light all day (and night). The sun simply moves around the sky in a circle.

Leroy Chiao
Posted by Leroy Chiao at 6:43 PM No comments:

We made our first live webcast to a series of Challenger Learning Centers today! All went well. Today's webcast was about the HMP in general and the kind of work that is done up here. Matt and I hosted the show, while Keith asked the questions and ran the video equipment. We had a guest appearance from "Robot Matt," from the NASA-Ames robotics team.

Prominent in our broadcast was Explorers Club flag number 162!

Leroy Chiao
Posted by Leroy Chiao at 12:55 PM No comments:

Out on a Short EVA

The HPT leader, Pascal Lee (and his dog, Ping Pong) led our team out on a four hour traverse today on all-terrain vehicles. We explored a section of the Haughton crater rim and also visited some of the Columbia Astronaut Memorials.

Pascal posited and I agreed, that this seems an ideal way for astronauts to explore the Moon and Mars. Instead of creating one or two complicated and large rovers, which may break down and force the astronauts to walk back to base (which severely limits the operational range of the rover), why not create a fleet of small ATV's for exploration? Each ATV would be capable of carrying two suited astronauts, in the event that one or more of the ATV's failed. Moreover, the ATV's would be more agile, flexible and faster than a large rover. More exploration could be accomplished and EVA time would be used very efficiently.

Leroy Chiao
Posted by Leroy Chiao at 6:51 PM No comments:

This is a photo of Keith and Matt next to the Arthur C. Clarke greenhouse, which Keith and others installed two years ago. It is of course used to conduct horticulture experiments. However, the cook has found it to also be an excellent place to allow bread dough to rise!

Leroy Chiao
Posted by Leroy Chiao at 6:44 PM No comments:

Keith and I are both Fellows of The Explorers Club. We are carrying flag number 162 with us on this expedition. We will shoot some photos of the flag with us in some special locations on Devon Island in the next few days. Stay tuned!

Leroy Chiao
Posted by Leroy Chiao at 9:34 AM No comments: 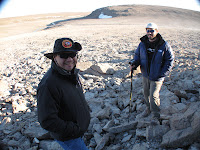 Here is a photo of me with Matt Reyes, the third member of our expedition, on Devon Island. Matt is a horticulture scientist as well as a whiz with video processing.

Leroy Chiao
Posted by Leroy Chiao at 8:53 AM No comments: 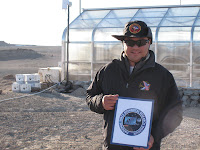 The National Space Biomedical Research Institute funds research that is conducted on Devon Island. I carried a plaque of the NSBRI logo with me on this expedition.

Leroy Chiao
Posted by Leroy Chiao at 8:50 AM No comments: 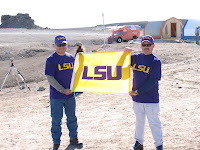 Keith Cowing and I are co-chairing a Risk Symposium, which will be held at Louisiana State University from October 28-30 of this year. It is a follow-on conference to one that was held by NASA in 2004. The conference will feature prominent explorers and their expeditions, both on earth and in space! Check out the web site:

Here is a photo of Keith and me on Devon Island in our LSU garb. This is probably the farthest north the colors have been! Devon is less than 1000 miles from the North Pole.

Leroy Chiao
Posted by Leroy Chiao at 8:45 AM No comments:

I arrived on Devon this morning. This place looks like what I would expect Mars to look like! Also, there is a lot of very fine dust, as there would be on Mars, which gets into everything.

The base consists of different modules and is arranged logically, as a base would be on Mars. There is a central mess tent, a central core area, communications, storage and workshop spaces. The hygiene stations are shared and the people live in a tent city.

After arrival, we received safety briefings, a tour of the base and communications briefing. We then set up our tents and unpacked our gear. After lunch, our team discussed our activities for the next several days.

We arrived with the rover team from NASA Ames. We will follow them as they conduct operational tests of their two rovers. The two are equipped with different sensors and will be used to map out areas under controlled and semi-autonomous conditions.

Leroy Chiao
Posted by Leroy Chiao at 3:51 PM No comments:

After a multitude of flights, stops in Detroit, Ottawa, Iqaluit, Hall Beach and Nanisivik, I've arrived in Resolute. I am told that Resolute is the SECOND most northerly city. Who's counting? Apparently at least one person from a place called Grise, which is pronounced 'grease.'

Leroy Chiao
Posted by Leroy Chiao at 10:06 PM No comments:

I just got back from a two week trip to China late last night and I am leaving for Devon tomorrow. Scrambling around to make sure that I have all of my gear and get it all packed!

Note the two other sites that I have listed in the Devon Island Expedition photo caption:

Also, please see our press release for the expedition at this link:

Leroy Chiao
Posted by Leroy Chiao at 1:11 AM No comments: