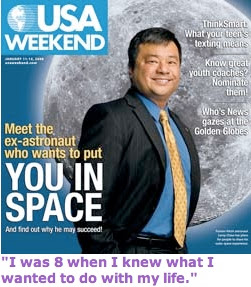 Wow! I was just honored with a cover story in last Sunday's USA Weekend Magazine!

Astronaut Leroy Chiao achieved his ambition for adventures in space. Now he's trying to open the skies to his fellow dreamers back on Earth.

The wind whipped 7-year-old Sandy Chiao's hair as she stood nervously atop an imposing pile of sand, strapped into an elaborate hang glider designed by her 12-year-old brother, Leroy.

He had slaved over the homemade flying machine and had high hopes for the mission. When he commanded his little sister to run and leap into the air, they both were confident she would soar into the heavens. After all, Leroy was so good at constructing model planes.

Then came the crash.

"It was OK," Sandy recalls, four decades later. "I didn't get hurt. Besides, it was an adventure."

It was the first of many -- and one of the few failures -- for Sandy's exceptional big brother. Since then, Leroy Chiao's preoccupation with the heavens has led to his becoming a leading member of two of the most elite and exclusive groups on Earth: NASA astronauts and, now, one of many pioneers in the frontier of commercial space flight. If he has his way, flying to the moon will be as common for our kids as hopping a flight to Grandma's.


BRINGING SPACE TRAVEL DOWN TO EARTH

The tug to explore beyond our physical boundaries seems intrinsic, a race to space that transcends nations and is rooted deep in our DNA. This new quest to bring space travel down to earth, so to speak, so that anyone can book a flight to the stars has captured the imagination of a new generation of private entrepreneurs.

In many ways, the ambitious Chiao exemplifies this handful of dreamers determined to commercialize space. The most famous is British billionaire Richard Branson, who is selling $200,000 seats to space in 2009 (see box, next page).

At the same time, Chiao is unique. As a first-generation American whose parents fled China for Taiwan in 1949 on the roofs of speeding trains and in fishing boats, he may not seem the obvious modern-day version of the legendary Wright brothers. But as a highly experienced former astronaut, he has one of the most impressive rŽsumŽs in the history of space travel -- as well as a populist notion of space travel.

"We are on the edge of the barn-storming era of space flight," says Chiao, 47, who lives in Houston with his wife, Karen, and their 13-month-old twins. "There are several companies racing to make commercial space travel a reality sooner than most people think."

Chiao's fantastic voyage really dates back to the mid-1950s, a few years before he was born, when his parents came to the United States to study. When he was 7, the family settled in Danville, Calif., a mostly white community where the Chiaos wanted their children to be fully American in their day-to-day lives but culturally Chinese at home. "I always told them, 'We want to have the best blend of American and Chinese,' " says Chiao's father, Tsu Tao.

The young Chiao found a model for his lofty aspirations in 1969, when he watched Neil Armstrong step on the moon. "I was 8, and I knew what I wanted to do with my life," Chiao says. Soon after, "he made his own rocket," says his mother, Cherry Chu. "It had wheels, so it was really more of a go-cart. He always gave the neighborhood kids rides on it."

Too small to excel in many sports, he focused on academics and his goal of becoming an astronaut. The hard work paid off when he was accepted at the University at California, Berkeley. "I had to hit the books hard and took abuse from the other guys for not partying enough," he says. "I told one friend that I wanted to be an astronaut, and he teased me by joking about wanting to be a policeman, firefighter or Indian chief."

Years later, after he applied at NASA and landed an interview in 1989, Chiao waited four months for a decision, only to learn he had not been accepted. "I was disappointed," he recalls. "I had a couple of drinks. The next morning, NASA called again and indicated there had been some kind of mix-up and invited me to join the 1990 astronaut class. That woke me up in a hurry. I almost didn't believe it!"

In his astronaut class, at age 29, he exuded confidence, a colleague recalls. "He walked in the door and announced that he wanted to do a space walk," says former astronaut Don Thomas, a crewmate on Chiao's first shuttle mission, the 1994 Columbia shuttle. Two shuttle missions later, he had distinguished himself so greatly that NASA asked him to fly with Russian cosmonauts and command a six-month mission on the International Space Station in 2004.

The Space Station flight was his last mission. After President Bush signed the Commercial Space Launch Amendments Act in December 2004, intended to promote the development of U.S. commercial space flight, Chiao felt the challenge: He decided to move from astronaut to space entrepreneur.

"I had done all I could do in a flying career," he says of his decision to leave the space agency. For Chiao, "the real future of space travel and exploration was in the private sector."

Chiao's Russian experience helped lead him to Excalibur Almaz space company, a private, international space venture planning to operate its own spacecraft and space stations commercially. "We hope people will be able to travel as easily on a spacecraft in the same way they do on an airline," says Chiao, who's in charge of Excalibur Almaz's space operations, which include training potential passengers.

The private sector has long had access to space, however, communication satellites piggybacking on government rockets is a long way from what's hoped for. To date, only five "tourists" have flown to the International Space Station, and they were on Russian, not American, capsules.

Now you can buy a ticket to ride -- for a price
Chiao claims that "in the next few years," Excalibur Almaz will offer week-long flights that deposit tourists at modernized, Russian-designed space stations. His mission is to make sure such journeys are safe and economically efficient. The price of a seat is still up the air.

"We're going to take things further and faster by using proven technology and spacecraft, which will ultimately bring down costs and make space flight available to more people," Chiao insists. "This [is] a chance to enter a new, exciting and growing area that [allows] me to share my amazing experiences with other people."

Fifty years ago, on Jan. 31, America launched its first satellite, Explorer 1. That historic moment in the annals of space travel spurred fantasies that, some day, everyone might have the chance to blast off from Earth.

Now, that opportunity is available -- if you have $40 million to spare. That's the price of a ride to theInternational Space Station in a Russian Soyuz space capsule. (Only a handful of very wealthy people have taken the trip, becoming the world's first "space tourists.")

The rest of us are still dreaming, but affordable space travel is getting closer. In 2004, SpaceShipOne, built by famed aircraft designer Burt Rutan, claimed the$10 million Ansari X Prize for innovation. It is the first commercially built manned craft to reach space.

Now, Virgin Galactic, the company founded by British billionaire Richard Branson that's behind SpaceShipOne, is selling tickets. For only $200,000, you can experience weightlessness, get a view of the Earth from space and, we hope, enjoy one heck of an in-flight meal. Possible departure date: as early as 2009.

Several other companies also are planning spaceship flights, with the cost for passengers expected to be roughly in the same price range.

Of course, a trip that costs as much as a starter home is still far from making space travel available to the masses. More affordable space voyages may be as little as 10 years away, when prices could fall to $30,000, Virgin Galactic's Rutan has estimated. That's about the price of a well-outfitted Toyota Camry. Start saving today.

Mike Hammer is the former editor of "Shock" and "Stuff" magazines. His longest flight involved a layover in Pittsburgh. Cover and cover story photographs of Leroy Chiao by Robert Seale for USA WEEKEND

Leroy!
Linda Silva here, class of 1978. I wrote you a few years ago because I was teaching Algebra and when I turned the page, there you were IN MY ALGEBRA TEXT!
Our 30 year reunion is in Sept, and we'd love for you to come!
I'm not quite sure how it happened, but suddenly, I found myself with Vicki Giovacchini, Coco Martinovich, and Katie McIver and others putting this reunion together. As I sat and wondered "How in the hell did this happen?" I realized that a very special handful of my dearest friends have survived breast cancer...what they did not ever know, until now, was how hard I cried when I read their letters...how much their pain affected me. I raged, I prayed, I raged some more, I cursed (I do a lot of that) and then I watched from a distance as they valiantly fought and won their respective battles.
I am very proud of these women, my friends, the fighters who refused to give up...

And then I realized...I WOULD see them all again...that it was terribly important for ALL of us to see who we are now, who we've become...to share in the successes of each other...
For we HAVE been very successful...
We have a couple of motivational speakers.
We have an astronaut.
We have some published authors
We have environmentalists
We have so much to celebrate…because…
We have not only achieved…We have SURVIVED.
We have, in so many ways, touched this world and left our mark...like all those hokey graduation speeches, we have DONE exactly what we said we would do in so many different ways, large and small.

Come celebrate with us as we raise a glass to our past glories, our present successes and our future endeavors.
The reunion is Saturday Sept. 20th
Roundhill Country Club
6-midnight
Send your check to:
Vicki Fischer
PO Box 332
Danville, Ca. 94526
85.00 per person