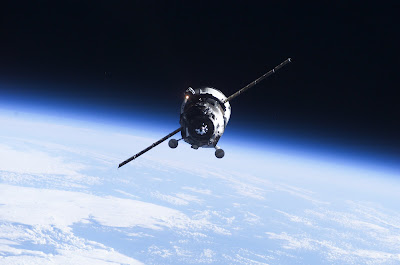 PS: The photo above is of Progress 17P as it approached to dock with ISS during Expedition 10. I snapped this photo of it at a range of about 50 meters.
Posted by Leroy Chiao at 3:48 PM

if you subscribe to the philosophy: "I'll believe it when I see it" then you might believe a little in SpaceX. They have serious hardware making the rounds on the test stand in Texas, the launch pad at Kwaj, and the shops in SoCal.

I believe that Elon Musk can make things happen.

NASA's commitment is a bit grayer. With recent comments from Griffin about his lack of confidence in crewed COTS it makes one wonder.

If SpaceX is a viable business, it doesn't matter as much how serious NASA is about COTS. Their success independent of NASA will benefit NASA.